A humble soul, Kris Kupskay – or “Kups” as most know him – is constantly surprised when people want to purchase his work despite nearing a decade of doing exactly that. Infused with wit and oozing with grace, any interaction with Kups is as memorable as his artwork. Bigger than his biggest mural is the collection of community project’s he chooses to pursue and a big part of why we choose him as a true Character of Whistler. Not only is he a visionary in the arts, but he is all about sharing his talent and marrying it with the mountains we love so much.

“I love Whistler.” Kups explains after exhausting a list of things he loves about this town. It’s simple, the whole thing together as a package is what keeps his free-spirited feet here. Originally hailing from Maple Ridge BC Kups started coming to Whistler regularly in the 1991-1992 season and Whistler never lost its grasp on him. He purchased his first season pass in 2000 and has had one ever since. In the last ten years, he’s found new ways to paint and new ways to enjoy his backyard most notably via dirtbike, snowboard and of course through the arts.

Recognizing that Whistler is made of much more than just activities and mountains Kups has found a way to integrate his passion into the community and share his passions beyond the many canvases that they adorn. “I stay connected to multiple organizations, schools, and foundations. I contribution time and annual artwork donations. I like helping wherever I can.” Modestly put, Kups donates a substantial amount of time yearly to schools and nonprofits helping them succeed through his talents. It doesn’t stop there, he loves “Getting into to skate park when the snow melts to paint over the tags and paint mess to help with the aesthetic and vibe. It’s been a while but will be in there again soon.” 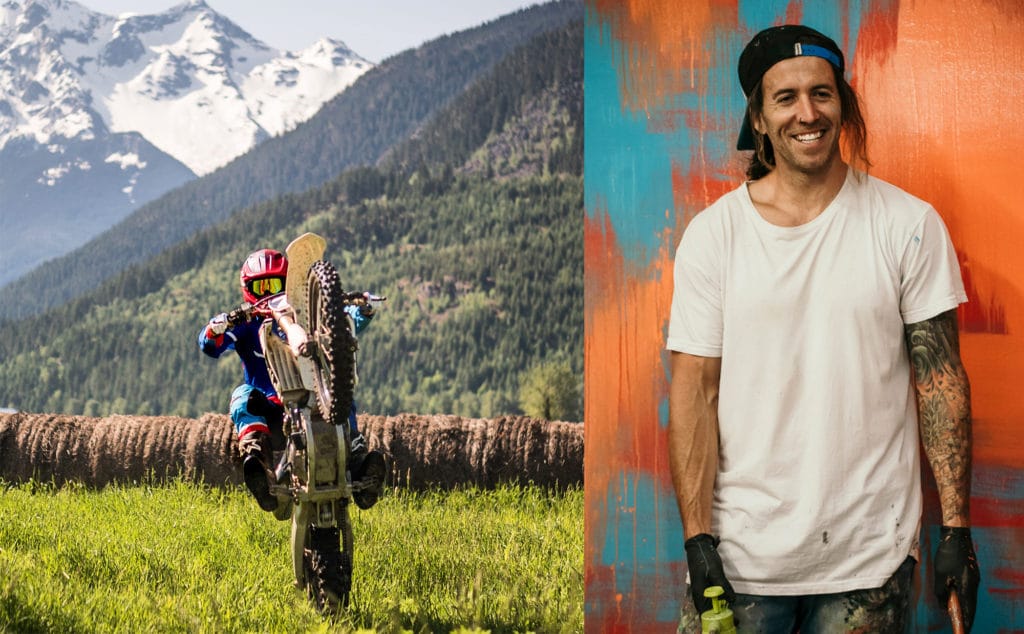 Kups in his natural environment.

When asked his biggest career highlight so far he responds “selling dry paint.” We told you this talented man was humble. So humble in fact that “Lately, I haven’t even been signing artwork. Enjoyment without any name to acknowledge seems the most authentic.” Have you ever encountered a being so driven to create without acknowledgment? Well Kups, we acknowledge you. For making our town beautiful with your artwork one wall at a time, with each masterpiece you’ve created to hide offensive graffiti, with each piece you modestly paint in our town and most of all with your ability to share, teach and encourage future generations to encompass the arts. Your kind demeanor motivated with pure intentions and talents have dubbed you a Character of Whistler and we’re stoked to celebrate you!

Kups’s mom fostered his creative progression throughout his childhood and his brother has always been a supporter of his art through all of its stages. Kups tells, “My brother has been a huge influence. He bought one of my first large paintings and hung it on his wall for the following 10 years. It was hideous. He refused to take it down, and when I’d beg him, he’d calmly mention it was a reminder. To be clear, the canvas was actually a king sized bed sheet. When I was just getting started, I’d raid second-hand thrift stores and buy used linens in which I’d later stretch over an 8’ x 8’ easel made of plywood and 2’ by 4’s. Primed with mis-tint discount house paint, stockpiled form local paint stores; an additional $65 in spray cans was required to complete the piece. My first 10 special edition ‘bed sheet’ canvases, which assembled a mural portfolio at the time, went for approx. $75. I’m proud to say that 7 original pieces currently hang on my brother’s walls. None, of which are have been painted on linens.” 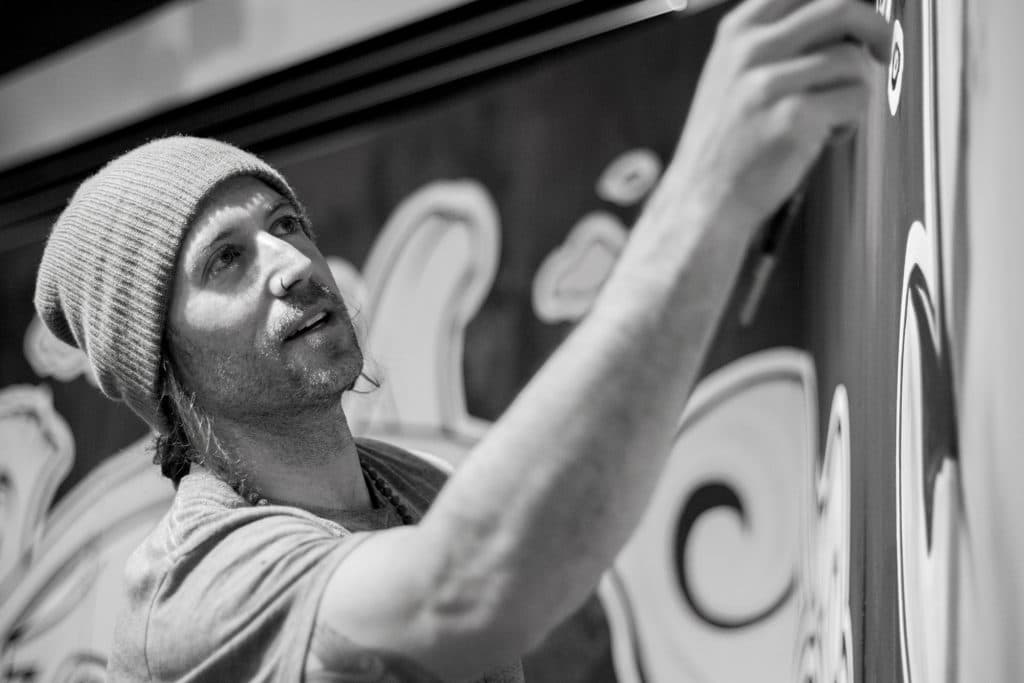 Kups working his magic on a piece for Lululemon. Photo by Abby Cooper.

WORDS FROM THE WISE

“Everybody’s always talking about the hustle. Chill more, hustle less. Enjoy where you are, what you’re doing, and the friends you’ve made along the way.” It’s this thoughtfulness that drives home his pure intentions through his work. Practicing what he preaches, Kups has an admirable work-life balance that encompasses enough hustle to maintain a career as an artist and enough chill to keep him grounded and inspired. In the realm of creativity, Kups follows the advice of Pablo Picasso closely, “Learn the rules like a pro, so you can break them like an artist.”

Find more of our Characters of Whistler series here.

Tonight is the second round of the Whistler Comedy Showdown, which means another seven ameatur comedians will be gracing the stage to make us hoot and holler. The doors open at 7pm and believe us you want...

My friend Josh started a conversation about ski touring and the huts that had been built over the last 50 years in back country valleys around this area. He’d been to one last winter and wanted to confirm...