Not only a reflection of where we live, but made of where we live, Foon Skis offer a truly unique ski and ski making experience. We’re beyond thrilled to announce that Gibbons Whistler has partnered with skiing pioneer Johnny “Foon” Chilton in Pemberton, British Columbia.

After 15 years as a pro rider, designing for big name manufacturers, and constantly being told “that ski can’t be mass produced”, Johnny founded Foon Skis in 2011. Read on to hear Johnny’s journey from ski bum to founder of Foon and what’s driving him! 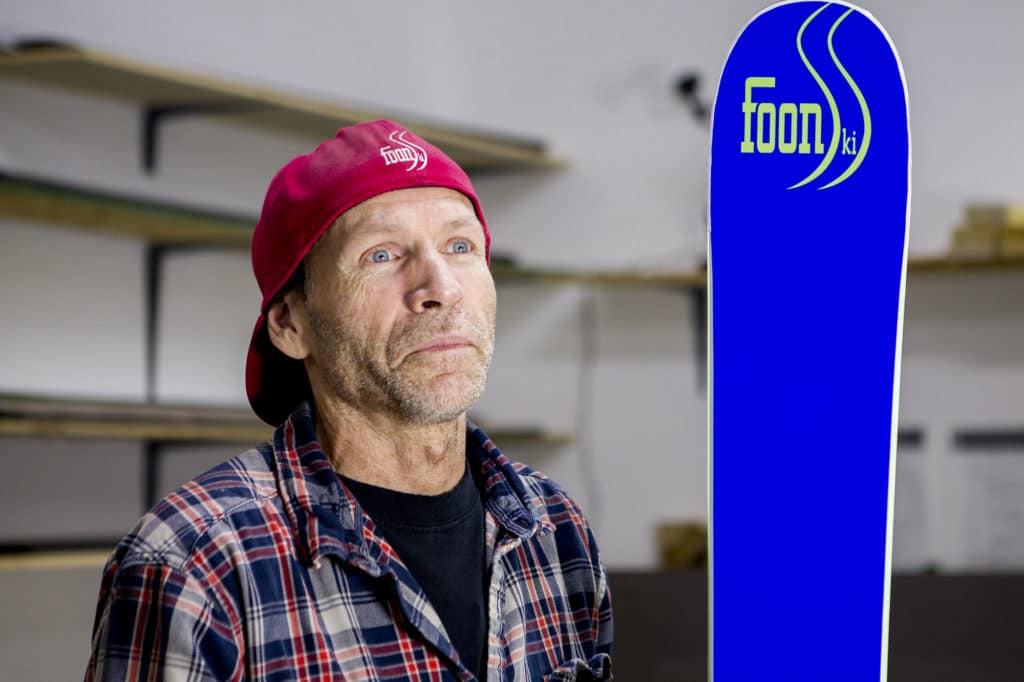 Johny Foon in his workshop during our on location interview.

Q: Skiing is crucial to owning a ski company, how did you get started?

A: It’s my mom’s fault. She started me skiing at the age of two growing up in Vancouver we went skiing every weekend. While feeling lost at university, I sold my modified car, bought a pickup truck and moved to Whistler – lalaland. It’s pretty much history from there. Now it’s a bit busy for my taste so I’ve made the move north to Pemberton.

Q: Tell us about the progression from ski bum in Whistler to founder of Foon skis?

A: I got super lucky because I fell into a job driving a snowcat on Blackcomb. For a ski fanatic there is no better job. You get to see the conditions first hand while working at night and then have all day to ski them. Starting to push the boundaries out of the resort and venture into the backcountry was like a drug and it was this freedom that started my career as a professional skier. Ski companies were asking how to make a better powder ski. Out of frustration of ski designs not going where I wanted them to, I realized that if I wanted a ski that I wanted to ride, I had to make it.

Q: How does a pair of skis begin?

A: The whole process of Foon skis starts with a two by eight cedar plank that is split down the middle and then those boards are never separated so that the two skis on your feet have the same flex. Because wood is so much different, one piece to another, it’s really important that your two skis match.  Then they will be hand shaped to your specifications.

A: It produces a really damp ski. Yellow Cedar has a lot of oils so it has the ability to absorb a lot of vibration and offers a lot of stability. It’s also a local wood in the coast range. 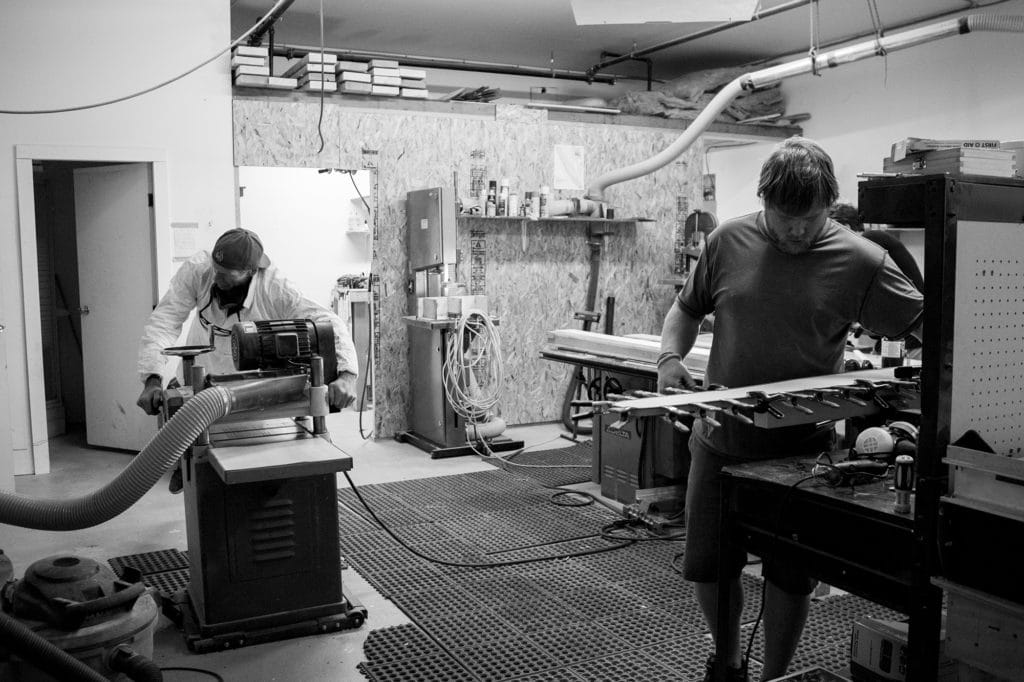 Q: You’re primarily offering custom built skis, why is that?

A: Custom skis are the way of the future. Skis off the rack are built for someone that doesn’t exist. Every rider needs a different flex be it there are bigger, small, aggressive in bounds, ski only powder, and so on – so if you’re hand shaping your own cores it’s pretty easy to dial in exactly what they need based on priorities and physical make up.

Q: How do you dictate what trends to explore?

A: The beautiful thing about having the shop is that I can build prototypes and test them the next day to get a feel for different technologies. The progression has gone from being a better skier myself  to being able to make better skis to now being able to follow the young guys and make skis that go with their style. It’s the marriage of new school and old school; I call it one school.

Q: Where does your passion come from?

A: That period when we were forging into the backcountry terrain of the coast mountains that nobody else was really skiing in was a magical time. Every time we went out we got better and our knowledge base grew and it was super addictive – I loved every moment of it. I’m 56 now and there’s no reason why I can’t keep improving and can’t keep increasing my knowledge base and becoming a stronger person in the mountains. I’m still on that same run and I’m sure I will be for a while, there’s just nothing I’d rather do.

Q: Why do you want to make skis everyday?

A: One of the things that drew me into becoming a ski company and not just making them in my crawl space for myself was the connection to the mountains. I’ve always believed in local economy, that includes the resources and the people.  I once went up to a logging slash behind my house and got some yellow cedar logs and milled them up myself. I built myself a pair of skis and that winter went up to the logging slash and skied where the tree grew up. It was magical. It makes me feel like I’m a part of this place – what I do here is important, I can be a part of it or I can wreck it. I’m trying to share that magic of the coast mountains and the life force around us that you feel when you go skiing with people through the skis themselves. 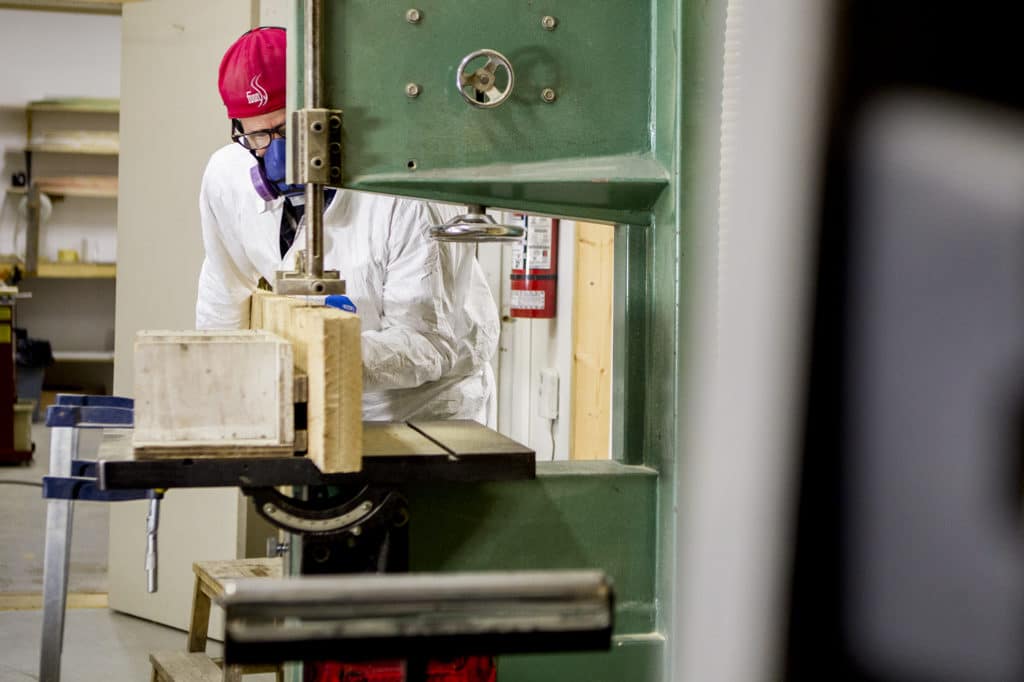 Johnny splitting a Yellow Cedar plank in two for a future pair of BC made skis.

No doubt his soul is saturated with skiing and all things British Columbia which is why we are so thrilled to add Foon to the Gibbons Whistler family. We’re excited to share a video with you in the upcoming month featuring Foon from the shop and into the powder. In the meantime, keep tabs on these guys by following @FoonSkis on Instagram.

The Legendary Chairlift Revue is Back and Festive

Stepping into the sun on Whistler Mountain gave me the biggest goofy grin. Snow carpeted everything. When looking up from town I could only see one section of the mountain range. From up here the endless...

For a place renowned for its parties, you can only imagine what the parties will be like for Whistler New Year’s Eve 2019, the biggest party night of the year. Whistler has a time-honored tradition...