How to Do Australia Day in Whistler

Ah – Australia Day in Whistler. It’s that time of the year when you’ll hear chants of “Aussie, Aussie, Aussie!” echoing down the Village stroll, met by an enthusiastic “Oi, Oi, Oi!” in response. Seemingly half the population of Whistler is Australian and deeply embraces the holiday. Whether a local or visitor to Whistler, it’s impossible not to get caught up in the festive and exuberant atmosphere.

Australia Day falls on a Saturday this year (January 26th), but our predictions are that the real party will likely start on Friday afternoon – and given the time difference it’s definitely a two-day party. Like any good Australian party, this one might just roll right through the whole weekend. Here’s how to make the most of Australia Day in Whistler.

1. Preparing for Australia Day in Whistler

Aussies – you’re going to have to don your national colours on this day. Canadians, you’d best do the same. Head to the Whistler Hardware, they always have a few stickers, flags and tattoos lingering about.

If you’re one of the many Aussie workers in Whistler then it might be a good idea to request not only the Saturday but also the Sunday off work. Sorry, Canadians – it’s a matter of national pride – you might have to cover your Australian brethren’s shifts during this time, maybe arrange a deal for the same treatment come Canada Day. 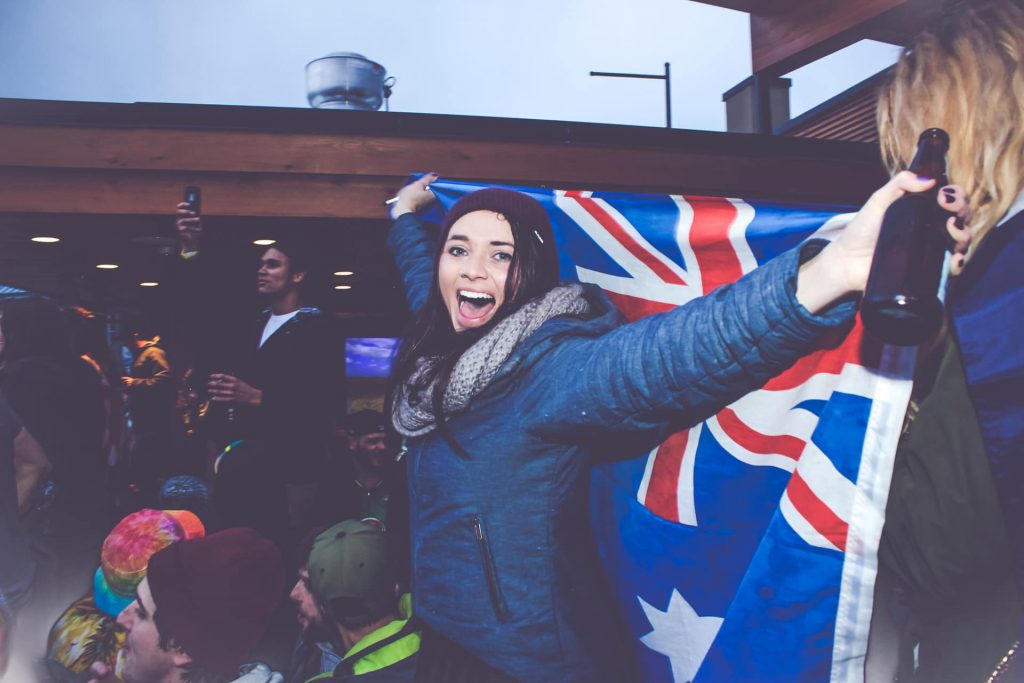 National pride. Grab all your Australia Day accessories at the Gibbons storefront.

2. Have a Vague Idea of the Day’s Historical Significance

Just in case someone should ask, Australia Day is the official national day of Australia. Celebrated annually on January 26, it marks the anniversary of the 1788 arrival of the First Fleet of British Ships at Port Jackson, New South Wales, and raising of the Flag of Great Britain at that site by Governor Arthur Phillip.

Okay, so that’s a lot of names and dates that no one will bother to hear if they’re a couple of beers deep. In short – Australia Day celebrates the arrival of the British in Australia. It’s the Canada Day to our friends from down under, and it’s our duty as Canadians and a former British Colony to help them celebrate.

3. Where to Grab Some Aussie Inspired Food

Stonesedge always had some delectable Aussie inspired eats. Including an eggs benny with a twisted or sandwich both pair nicely with a tinny of ice cold Après Lager!  During the evening order up a carefully crafted Tim -Tam Cheesecake served to accompany every meal – YUM! 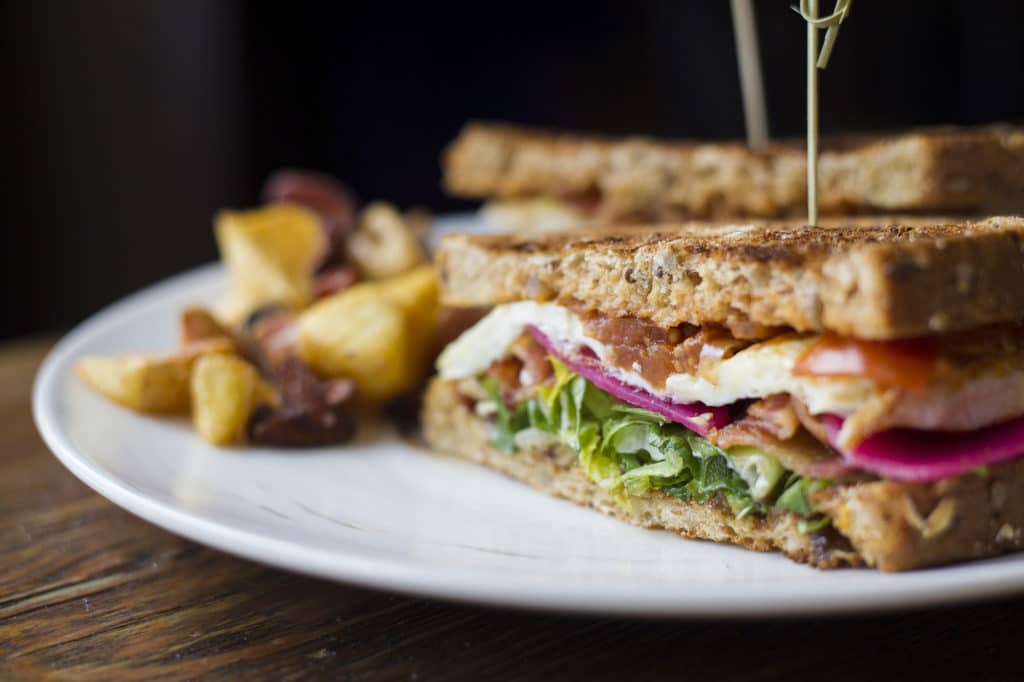 Aussie Sanga, eat in or order to go this Australian Day at Stonesedge.

Head to Peaked Pies for their “hopper” – a kangaroo meat pie. Get it “peaked” with mashed potato, peas, and gravy. If you aren’t able to stomach eating kangaroo, that’s completely fair – those hippity-hoppy buggers are darn cute. Instead, grab a “flat white” (steamed milk and espresso) and order a scrumptious dessert called “lamingtons” (sponge cake dipped in chocolate and coated in coconut).

Also be sure to coat everything in Vegemite on the day. Toast for breakfast? Vegemite. Poutine for lunch? Why not dip it in some Vegemite. Burger for dinner? Yep – it could use a little Vegemite. Midnight snack? Vegemite. The salt in it will help you to replace those electrolytes lost from partying. 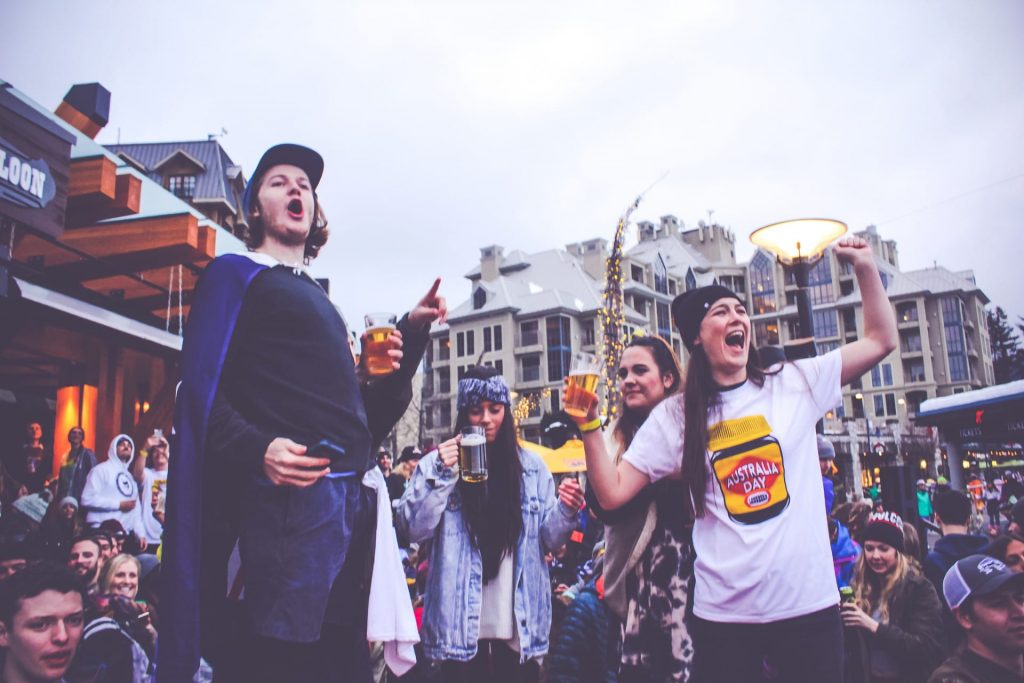 Salty goodness. Don’t forget to add Vegemite to everything on Australia Day!

Skip the lift lines altogether and start your Australia Day in Whistler early at the Longhorn, with the usual Saturday shenanigans kicking off around 10:00 am, or clock a few runs on the mountain and then ski/snowboard down right to the bar. The fireside patio at the Longhorn has been a popular go-to for Aussie’s celebrating the day, and the line will start to form staggeringly early in the morning.

The beloved Lazy Ghost will be going off at Tapleys this year on for prime après time from 4-7pm! You can be sure this crowd will be parting in true Aussie fashion so get ya boarides or bikinis on, zinc up ya snozz and sink a coupla tinnies to celebrate at Tapleys! It’ll be raging earlier than the scheduled 4 pm so start so get there early or you’ll be outta luck mate!

The dance floor to hit for Friday night is at no doubt Garfinkel’s.  The Garfinkel’s crew is Aussie heavy, so you can be sure their staff will be celebrating just as hard as you.

Or, book a Bar Hop Whistler pub crawl for a guided tour that takes you to four epic Whistler venues with express entry, five drinks of your choice, food, games and good times. 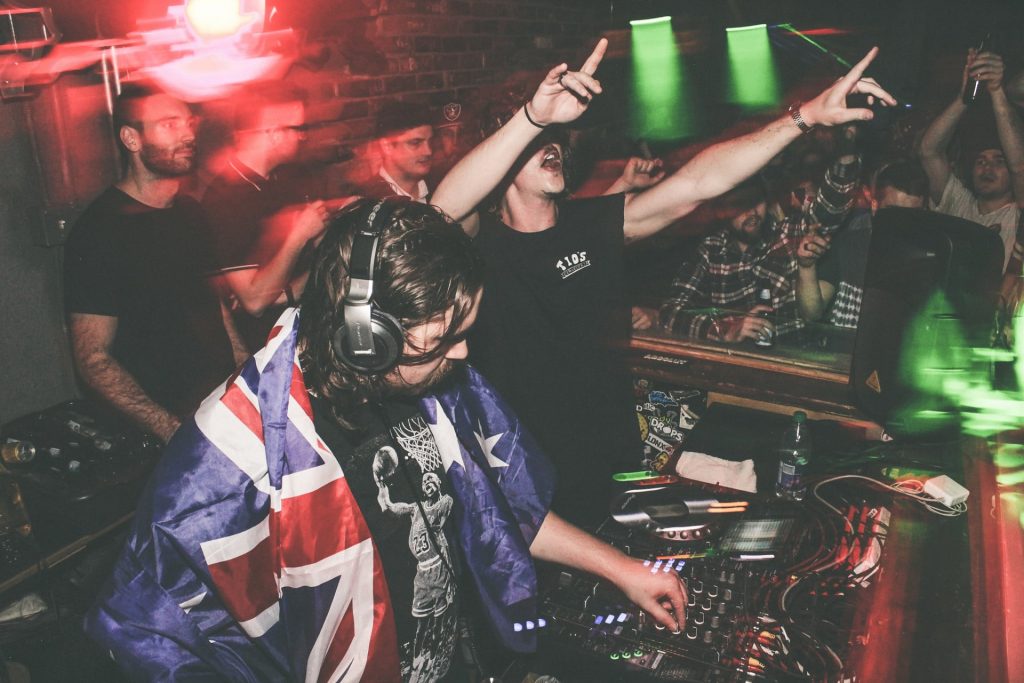 Pumpin’ beats. The Hottest 100 on the patio and Peking Duk underground – we’ve got the soundtrack to Australia Day in Whistler covered.

If you want to truly blend in with the Aussies, you can start by memorizing the lyrics to “Land Down Under”. Once you’ve got that down, be sure to practice your Aussie-chant, and always and enthusiastically responding with a good “OI OI OI”. On top of that, we thought we’d arm you with a bit of Aussie slang, such as:

Australia day in Whistler is a heck load of fun, year after year. Whether you ‘come from the land down under’, or are jubilant Canadian looking for another excuse to take a day off work and have a beer shockingly early in the day, it’s impossible not to get caught up in the festive atmosphere. Grab some neck oil and tucker, and have a beauty time this Australia Day.

For a place renowned for its parties, you can only imagine what the parties will be like for Whistler New Year’s Eve 2019, the biggest party night of the year. Whistler has a time-honored tradition...

There are some pretty powerful business-driven women in the Sea to Sky corridor and they’re a big part of what makes our backyard so inspirational. The WNORTH Conference was born to showcase these...

In a resort known for its winter prowess, it’s actually a shock for some people to find out that there’s a lotta love for the sunny summer months too. We asked some of Whistler’s longstanding locals...